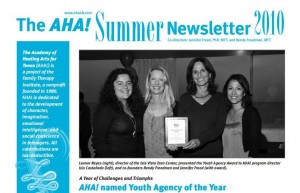 When AHA! (the Academy of Healing Arts for Teens) hired Alchemy, the nonprofit faced a looming six-figure funding shortfall because its main operational grant was set to expire at the end of the year. Within twelve months, Alchemy had not only addressed the shortfall, but expanded AHA!’s donor base through a direct mail solicitation campaign, twice yearly newsletters (with donor reply envelopes), and a greatly expanded grant-writing effort. We also began to inform the community of AHA!’s outstanding work with young people through press releases that resulted in feature stories by all the local newspapers, as well as interviews on local television and national radio. Three years later, AHA!’s budget had tripled—to over $300,000 annually—as had the number of teens it was able to serve.

See what Alchemy’s fundraising efforts can do for you.