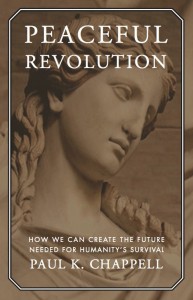 Paul K. Chappell graduated from West Point in 2002, served in Iraq in 2006, and left the Army as a captain in 2009. Even while on active duty, he began to doubt that war was ever going to bring peace—in the Middle East, or anywhere else. He published his first book, Will War Ever End? A Soldier’s Vision for Peace in the 21st Century, in 2008, followed by The End of War: How Waging Peace Can Save Humanity, Our Planet, and Our Future. His third book, Peaceful Revolution, will be published in February 2012, and he has begun work on a fourth. All of his books are written in a direct, accessible style, and his arguments for peace have appealed to people of all political persuasions.

Chappell now works at the Nuclear Age Peace Foundation (www.wagingpeace.org) and travels the country talking about the necessity of ending war and “waging peace.” He trains peace activists — a pursuit he believes should be undertaken with at least as much forethought and strategy as training soldiers for war.

Alchemy began representing Paul in the fall of 2010, interviewing him for an article that appeared in the April 2011 issue of The Sun magazine. Publisher Sy Safransky called the interview “one of the best we’ve ever published.” It was among the “most read” and “most emailed” for months and earned Paul many new friends, speaking engagements, and award nominations.

Working with Paul’s editor and the Nuclear Age Peace Foundation, we promoted Paul’s work to a variety of print and broadcast media, resulting in dozens of live talks, broadcast interviews, op-eds and interviews appearing in print publications reaching hundreds of thousands of people.