You know what a press release is:

But what you may not know is that business owners (a.k.a. Those do-it-yourself publicists) rely on press releases too. It’s true – they send them out when they want to tell the world about a new product or service they’re launching; a store they’re opening; an event they’re sponsoring; an award they’ve won; or some other newsworthy milestone they’ve achieved.

Thus, press releases are popular and important for business.

So that’s a press release. No big deal, right?

So what the hey is an SEO press release?

SEO stands for Search Engine Optimization. An SEO press release is one that is written so that search engines–those robots employed by Google, Yahoo, Bing, and AOL–will read and rank your press release.

You want Search Engines to read and rank your press release because these days online media are as important as print and broadcast.

So how do you write a press release that a robot will read and disseminate?

The same way you write one for people.

Not so bad, right? Here’s why:

Here’s what PRNewswire recommends about press release writing for SEO:

“Great content written with a specific audience in mind is good SEO and will increase your chances of being found.”

In other words, you write a press release when you have something newsworthy to say to a specific group of people.

How To Write a Great Press Realease

Although most people can talk in clear straightforward sentences, too many of us get muddled when we’re saying something in writing. So here are eight easy tips for writing a great press release that both search engines (software) and people will want to read: 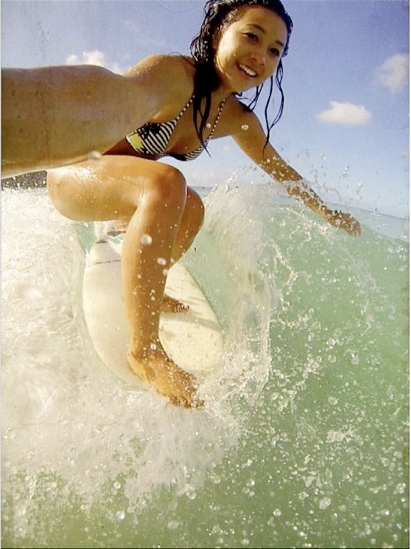 Kelia Moniz Noseriding some waves. Good PR? I think so.

1. Decide what your lead is—the news you want to tell. Here are three examples from Malibu NoseRiding Championship, one of our actual clients:

—
Outside TV signs on as Malibu NoseRiding Championship sponsor

Each of these headlines states clearly what the “news” is. Either it’s the first of something, some big name is getting involved, or there’s something people can win. Any way you slice it, someone will be interested and that, my friends, is the definition of News.

2. Tell who, what, when, where and WHY—the five Ws. It’s important in a press release to get as many of the basic facts as you can into the first paragraph. Although WHY is the last on the list, it’s often important to say “why” even ahead of who, what, when and where. That’s because attention spans are short; you need to let people know quickly why this matters. If readers care about WHY, they’ll stay with you to find out who, what, where and when. Here’s out it played out for Malibu NoseRiding Championship:

“History’s first-ever timed noseriding competition, in which men and women compete as equals for cash and prizes, will take place “On One Perfect Day” in October 2013 at Malibu’s legendary Surfrider Beach.”

(It’s not often that you can claim a history-making event, and when you can, put it up front.)

3. Fill out your press release with interesting details (content) as hyperlinks.

“The Malibu Noseriding Championship will bring together sixty-four of the world’s best longboard surfers to compete for ‘most time on the nose’ in an objectively timed event. The event will raise funds and awareness for the Malibu Beach watershed ecosystem—once a pristine environment named “Malibu” by the region’s first inhabitants, the Chumash.

“The event will attract some of surfing’s best, including (long list of championship surfers)…

“The Malibu Noseriding Championship will benefit three local nonprofits: Eco-Malibu, whose mission is to restore and protect the lower Malibu Creek watershed and historical wetlands of Malibu; the Bay Restoration Foundation, working to restore and enhance the Santa Monica Bay; and the Surfing Heritage and Cultural Center, dedicated to preserving, presenting and promoting surfing’s heritage for the appreciation and education of current and future generations.”

4. Include keywords in your press release. Keywords are terms that people will search for when they’re looking for a product or service you provide. If you’re a PR agency in Santa Barbara, “Santa Barbara PR agency” are likely some of your keywords, and so are “Santa Barbara” and “PR” and “public relations.” Anytime I sensibly include my keywords in my press release, I’m helping a Google bot rank it higher for those words.

Note: It can take some research and analysis to select your keywords, and we’ll say more about it in another post. For the time being, however, once you know what your company’s keywords are, use them in your press release.

Adding keywords can be as simple as including them in the headline: “Announcing the first Malibu NoseRiding Championship,” or in the first paragraph of the press release: “Alchemy On Demand, Santa Barbara’s PR agency, announces …” You can then add them, or variations of them, again in your press release whenever it make sense to do so–from a reader’s (not a robot’s) point of view.

5. Include a photograph or video. You learned it in school: “A picture’s worth a thousand words.” In the Internet age, that’s an understatement.

Photos draw readers’ attention. If you have no other image to accompany your press release, quote someone—even if it’s yourself—and include a head shot of that person. Photos make editors more likely to include your story—because they know that readers will be more likely to read it.

6. Include contact info, including a link to your own website. That’s important for reporters, but also for readers who may want to know more about you than just the information available in your press release.

7. Include “boilerplate” about your company at the very end of your press release. A Boilerplate is a single-spaced paragraph that describes what your company does. It provides background information for living, breathing editors, and adds credibility/authority for SEO software ‘bots. It’s also one last place to legitimately insert your keywords. Here’s an example using Lucky Penny Press, another Alchemy On Demand client:

“Lucky Penny Press is a children’s eBook publisher founded by Melissa C. Marsted, author of Pablito and the Speckled Bear. Lucky Penny Press, whose motto is “Nurturing the creative spirit,” publishes books written by both adults and children. Each book has a professionally recorded audio version. As part of LPP’s cultural fabric, each book is connected to a non-profit organization, which receives a portion of book sale proceeds. LPP sells eBooks in numerous eReader formats including those for iPads, iPhones, Kindles, Nooks, MP3 players, and any computer. Every eBook can be downloaded in either eReader or audio format, or both.”

8. Use Associated Press style. Associated Press (AP) wrote the rules for journalistic fine points followed by most written media. Since many editors will run your press release verbatim if they don’t have time, staff, or inclination to rewrite it, your job is to make it easy for them to do so. AP style includes rules such as spelling out numbers one through nine, but using numerals for numbers 10 and above (as I just did in this sentence). This rule doesn’t apply for dates, such as July 1, 2013, for which numbers are always used, or when a sentence begins with a number, in which case the number is always spelled out.

AP style also omits the “serial comma,” which is the comma before “and” in a list longer than two. For example, “dogs, cats and ponies”; not “dogs, cats, and ponies.”

(This omission of the serial comma upsets Hudson, and my son Noah, but we’ll leave the grammar nazis to fight amongst themselves, yes?)

Another AP-style guideline is to put the comma or period inside the quotation marks. When you’re quoting someone, it looks like this: “This is our first award,” the proud business owner said. “We couldn’t be more pleased.”

And that’s it. Follow these straightforward recommendations for writing press releases, and you’ll also be writing an SEO press release in no time.